Gemstones. Precious, cut, and polished stones mainly used as a statement in rings (especially within Shia community). These rings are not worn only as a cultural entity but rather as a symbol of spirituality. It is said that it is “Sunnah” (one of the practices of the Islamic prophet Muhammed SAW) for both a man and woman to wear the ring. 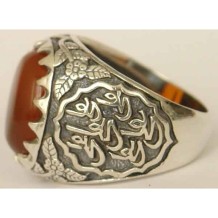 This concept of the rings containing a gemstone raises a question as to why one is recommended to wear it; and this is why I want to exhibit the gemstone’s deeper and spiritual properties, which you may have heard about indistinctly but, have never looked and read into it intensely.

‘‘Beautiful, Precious, A classic beauty’’ are words most of us use when we have one look at a gemstone, locked into place with a silver band, engraved with Islamic words and names of the members of the Ahlulbayt (the holy household of the prophet Muhammed of Islam revered by the Shia followers) surrounded by flowers and petals.

Allah has sent down certain stones with powers; and it is recommended to wear the ring with the gemstone facing towards the palm, ‘’because it is further away from ostentation and pride’’- the prophet Muhammed (saw); or with the gem touching the finger; and this is why most of these rings have an opening behind the gemstone, which enables the rays to pass through the gem and its properties to penetrate through the skin allowing the body to take in the unique energies and properties it possesses

he Ahlulbayt have told us that the wearing of a ring on your right hand protects you from envy and the evil eye.

In addition to the protection, the Ahlulbayt say that one of the 5 signs of a Mu’min (the Arabic term frequently used in the Quran which means a ‘’believer’’) is a ring on his right hand and it is recommended: to be worn on the pinky and ring finger.

The other 4 signs of a Shia believer is:

I will begin describing the properties of these gems briefly providing hadiths (narrations) from the Imams (as) and explaining the psychological and materialistic side of the gemstones from what I have come to conclusion with:

am Ali stated that he wants every Mu’min to have 5 rings: 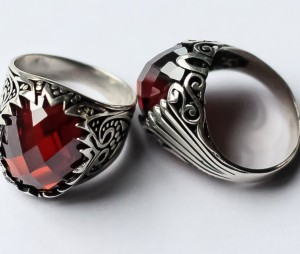 According to some it is said that the Ruby changes in depth of colour depending on the health of the wearer.

Imam Jafar Assadiq (as) has passed down from Amir al Muminin (as): ‘‘it removes poverty and tension’’

According to the 9th Imam, Imam Muhammed Al Jawad (as), wearing the ring of yakoot (ruby),‘’stops worries’’.

The best form of the Aqeeq is the liver coloured one from Yemen, which is expensive and difficult to find. However, Genuine Aqeeq rings can also be purchased from Iran, Iraq, Syria and Lebanon.

Not only is the Aqeeq used for rings, it is also used as beads on the tasbih as Imam Musa Al Kadhum (as) has said that ‘’it’s a great sawab (reward) to use tasbih of Aqeeq’’

The best Firoza is a sky blue one, which Iran is famous for.

This gem is known to:

It is said that it is best to remove the Firoza as soon as any crack is apparent on the stone.

Hadiths based on the Firoza:

The Firoza stone has tendency to change colour over time and if Musk touches the Firoza stone, it will make its beauty and shine disappear. 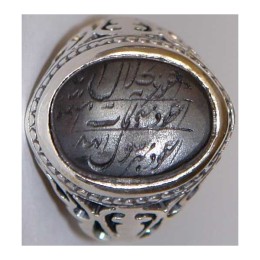 One does not have to always wear it. It is recommended not to wear it too long. Only when one is afraid of some kind of mischief in which one would wear it when visiting that environment.

And from some sources it is said Imam Ali (as) would wear it when he went into war. 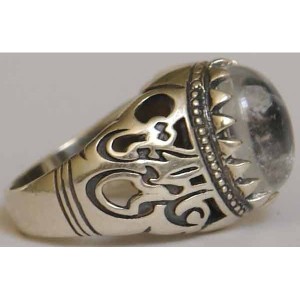 Lastly the fifth ring. This stone is only found in Najaf Al Ashraf either in rivers on land.

The very glance of it, Allah rewards the wearer the reward of Ziarat (a form of pilgrimage), Haj and Umrah.

The beauty of this gem is that it is not very costly like the other gems and because Allah is ‘’merciful’’, Allah has made this gem very easy for both the poor and rich to obtain and wear alike.

In many communities today there are many cases of divorce, relationships with the family breaking down, and even kids suddenly failing their exams after so much hard work and accomplishments at school or university.

Many of those people do not realise why this happens in their life and when you come to ask them why, they wonder why this is the case and come to the conclusion that it may be luck.

However, there are some who will tell you that they have an evil eye on them: “And verily, those who disbelieve would almost make you slip with their eyes…”

There is absolutely no doubt that some people envy you by looking at what you possess such as: your house, husband/wife, and children.

This evil eye is an energy that exists between humans and focuses on a person and can be damaging to them. This is why Imam Ali (as) has said:

‘Wear aqeeq on your rings, you will be blessed and will be saved from afflictions.’

There are two aspects to it. There is the psychological side and material side (which you can touch and study) and which modern science can’t prove or disprove.

This will keep your heart always linked with your religion. Like an invisible golden chain that links you to the Ahlulbayt (as) and the prophet Muhammed (saw) and Allah (swt).

Even if it is an object and is not true which many people are against. You being able to give it your secrets and being able to wear it makes it something special that you are able to hold on to.

The beauty of the psychological side of it is that nobody can take share on that belief or interfere with it. It is something personal and it can stay with you as long as you live. It’s a medicine, it’s a cure, a solution, which helps you live, and has no negative affects on you.

It can be measured it can be tested: from the weight, its reflection, qualities radiation and so on.

But because the research is so expensive and will not lead to a substantial finding. It has therefore been dismissed and been ignored. It’s known that certain stones react with certain glands i.e. thyroid glands or even encourage pregnancy.

Gemstones have been proven to have special characteristics and benefits that can enhance ones abilities. But, this is a deep study, which needs a lot of resources, which involves time and money.

By this discussion now, I am inviting you to think and understand it through a spiritual side.

It doesn’t affect the lives of people or have any negative influence on the body and it is a beautiful entity to have a different angle to the life of people and interconnect our bodies with other parts of Allah’s creations.

…. And Allah knows the best 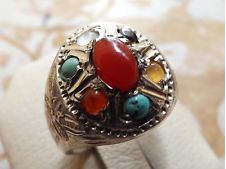 Beautiful rings containing these stones can be purchased on www.shiashopping.com and www.shiastore.co.uk